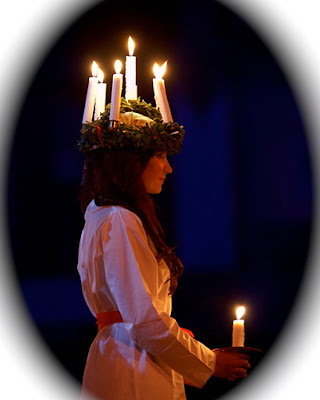 Lucia is an ancient mythical figure. She comes as the bearer of light into the dark Swedish winter. This tradition can be traced back both to St Lucia of Syracuse, Italy - a young martyr who most likely lived in the early 30o, and to pre-Christian mythology. The night before December 13th was considered the longest and most dangerous night of the year. It was a magical night when the realm between the real world and the supernatural was open. Beings like trolls and Tomtar, gnoms, that lived underneath rocks and boulders, and even under the barn, Älvor and Näcken, fairy like creatures dwelled in the woods and in streams, were active. And all animals could speak on this night. But, one must take care not to come close enough to hear what was said. No matter how curious one might be. Stay away or risk famine, or even the death of one's farm animals. By morning the danger was over, and everyone must eat. The animals needed extra feed. People too. One was urged to eat between four and nine hearty breakfasts. By this time, the harvesting and threshing were over and the cellars and cupboards were filled with apples, potatoes, turnips, hams, sausages and more; in preparation for the Christmas celebrations on Julafton, December 24th.
Tradition goes that during this night, young people dressed up in white and visited neighbors singing songs and asking for food. These days, many teenagers keep up the tradition, although in a more modern fashion, pulling an all-nighter hanging out with friends. Something I remember doing. It was difficult the next morning, keeping my eyes open while the teacher lectured. Thankfully, most teachers took it easy on us and showed a movie during class. But I especially loved the morning of St. Lucia Day. Lucia, a white-clad woman, along with her white-clad procession of stjärngossar or star-boys and tärnor, her handmaidens, sang the traditional Christmas songs. Christmas would soon be here. 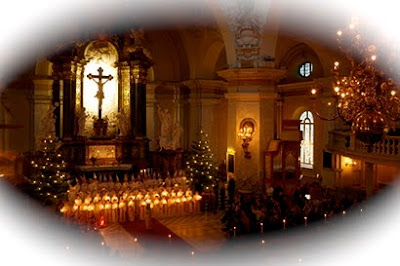 Many songs share the same theme of the return of lighter days:
The night trade lightly
around yard and dwellings
in places unreached by the sun,
the shadows broad.
Into our dark house she comes,
bearing lighted candles,
Saint Lucia, Saint Lucia.
Lucia serves lussekatter ~saffron flavored buns shaped like curled-up cats with raisins for eyes, and pepparkakor ~ spicy gingersnaps. You eat them with coffee or glögg, a delicious spiced red wine infused with cloves, cardamon and cinnamon.
Here's to wonderful childhood memories of golden yeasty sweetness. 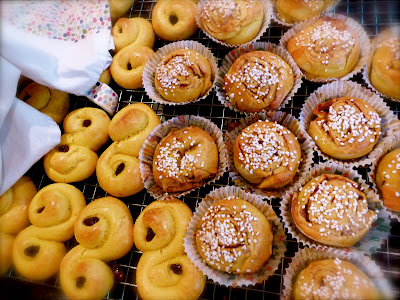 Melt butter in a medium sauce pan. Add the milk to the melted butter and heat until about 105-110 degrees. Pour into a medium-sized bowl. Add the yeast, psyllium husks, 1 tsp sugar and whisk together until yeast has dissolved. Let sit for 10 minutes to proof the yeast. The liquid will bubble up.

Pour the yeast liquid into a mixer fitted with a paddle attachment. Add the sugar, saffron, salt, guar gum, gelatin, one whisked egg, cardamom, and flour blend to the mixer. Beat on medium speed for 5 minutes. Scrape down the bowl. The dough will be extremely sticky, do not worry, this is normal. Remove the mixing bowl from the mixer and cover the bowl with plastic wrap. Set in a warm part of the kitchen and let rise for 30 minutes. 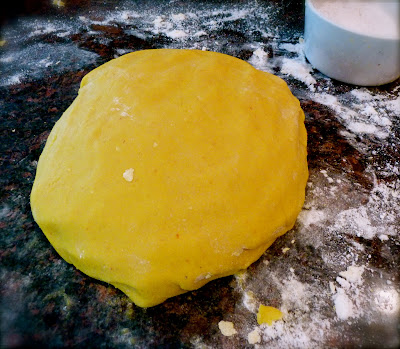 Punch down the risen dough. Lightly knead two or three times on a floured surface. Divide the dough in two. Place one half to the side and cover with clean kitchen towel. Pinch off small handfuls of the other half (about 1 1/2"inch balls) and roll into "snakes." Shape snakes into "S"-shaped buns or other desired shapes. Place on a parchment-lined baking sheet, cover loosely with plastic wrap or a clean kitchen towel. 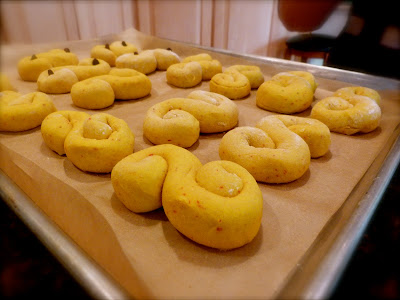 For cinnamon buns - Put 8 cupcake paper-cups on a cookie sheet. Set aside. Sprinkle some flour on top of the counter top, enough to cover the surface. Take the second half of the dough and place on the well floured surface. Flatten the dough with your fingers. Using a rolling pin, roll the dough into a 10x15 inch rectangle. Keep adding more flour, as needed, if the dough gets sticky. 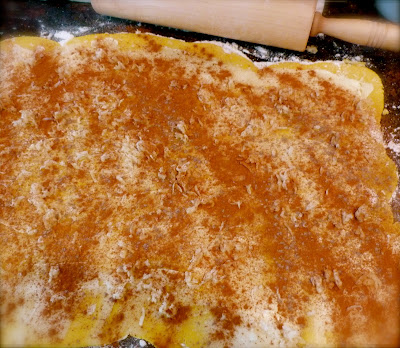 For the Filling: Spread the dough with the softened butter. Sprinkle the dough generously with sugar and cinnamon. Slice the almond paste thinly or crumple pieces with your fingers, and layer on top of dough. Roll the dough into a log, starting at the widest end of the rectangle. Cut into 2-inch pieces, dipping the knife in some flour if it gets sticky. Place the rolls into the paper-cups. Place the cookie sheet in a warm part of the kitchen, and cover with plastic wrap or clean kitchen towel. Let the rolls rise for 30 minutes.

Preheat oven to 375 degrees. Remove plastic wrap or towels from the cookie sheets. Using a pastry brush, brush each roll with the egg wash. If desired, decorate the S-shaped buns with raisins, pressing one into each end. Decorate the cinnamon buns with a sprinkle of pearl sugar or raw sugar. Bake the S- shaped buns for 8-12 minutes, until tops are golden. Bake the cinnamon buns for 12-15 minutes until golden brown. Remove from oven and transfer the rolls to a wire rack. Cover with a clean kitchen towel and let cool. If you have any leftovers...place in ziplock bags and freeze. If stored in freezer~let the buns defrost and warm in the microwave for 8-10 seconds.

*Psyllium husks are the same as Metamusil, which is gluten-free. Get the unflavored variety. This adds fiber, texture and elasticity to the dough.

*Pearl Sugar can be found at IKEA stores. It can easily be substituted with raw sugar or top the buns with chopped almonds before baking. 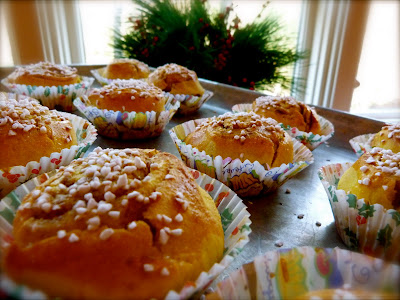 Photos by Anna Simon, unless otherwise noted. Lucia and Chorus photos from www.imagebank.sweden.se.
Posted by Cooking Gluten-Free with Anna at 11:35 AM 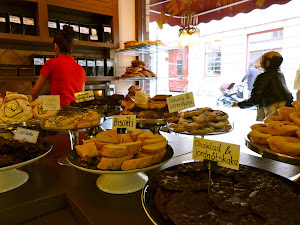 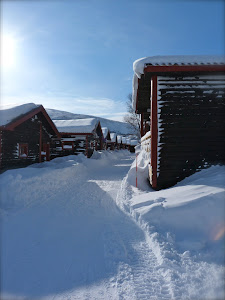 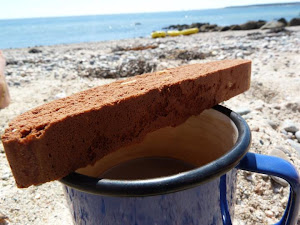 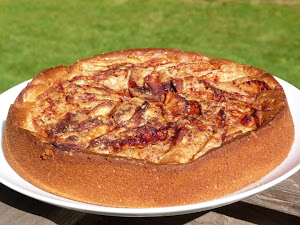 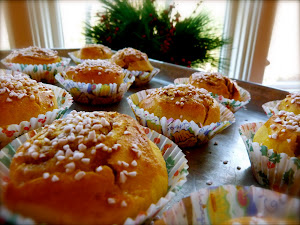 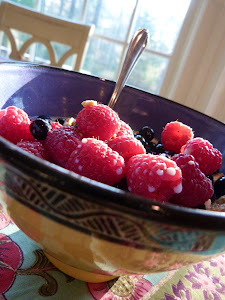 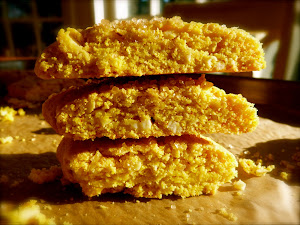 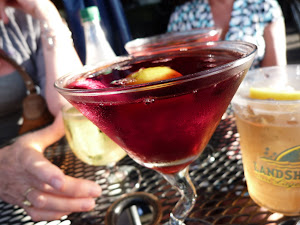 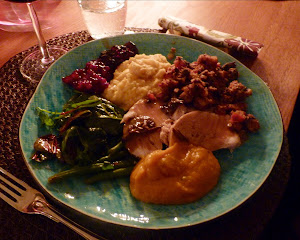 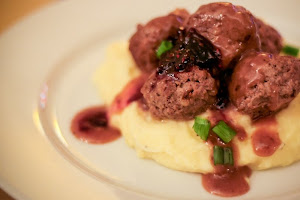 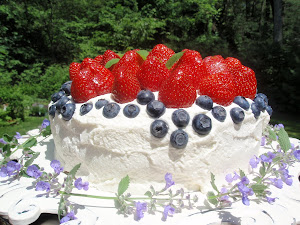